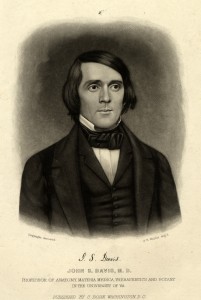 John Staige Davis was the son of John A. G. Davis, one of the first to receive a diploma from the University of Virginia in 1828. John A. G. Davis joined the faculty as a law professor in 1830 and served for ten years until he was fatally shot by a student whom he was trying to apprehend. His son, born in October 1824 in Albemarle County, would have spent several of his early years at The Farm, a house on land owned at one time by the uncle of explorer Meriwether Lewis. John A. G. started building the house, originally outside the eastern city limits and now inside the boundary on East Jefferson Street, in 1826 and occupied it the next year1 This example of Jeffersonian residential architecture is now listed on the National Register of Historic Places.2

John Staige was a brilliant scholar who began his four years of study at the University in the 1837-1838 session and registered for every class offered except Civil Engineering.3 He was in his fourth year taking medical classes when his father was killed. He earned his medical degree in 1841, making him only 16 years old at graduation.4 He then studied practical medicine in Philadelphia for eighteen months. Dr. Davis worked as a physician in Jefferson County, Virginia, now in the eastern panhandle of West Virginia, until he was named to the UVa faculty as the Demonstrator of Anatomy for the 1847-1848 session.5  Back in Charlottesville for less than two years, he was not yet 24 when he became the youngest signer of the fee bill. He was appointed a Professor for the 1855-1856 session and taught Anatomy and Materia Medica for 30 years, some years including Therapeutics and Botany, until his death in 1885.6 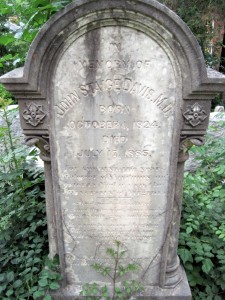 A Cyclopedia of American Medical Biography pronounced Dr. Davis “one of the greatest teachers of anatomy America has known.”7 This is an assessment that would not have surprised his students, one of whom wrote in 1849, “…He has that affable, familiar, and at the same time, dignified character that is obliged to inspire one with the feeling of respect and affection …. I speak the sentiment of the whole class when I say that Dr. Davis secured the lasting regard and esteem of every member of that class. His suavity of manner, his unremitting and assiduous attention to his duties, his amiable heart, and a mind richly stored with a diversified knowledge of his profession, bespeak for Dr. Davis an enviable reputation ….”8 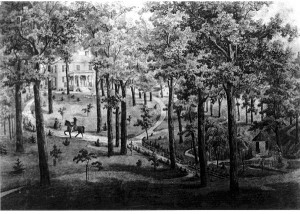 Antebellum view of The Farm from the south. Courtesy of Michael Bednar and Elizabeth Lawson, owners of The Farm. John A.G. Davis House at “The Farm,” accessed 2 August 2011.

In 1847 Davis married Lucy Landon Blackford with whom he had three children.9 At the time of the 1850 census the Davis household consisted of John, Lucy, his young son, and a 20-year-old mulatto named Ann Tyree.10 Tyree was evidently a free woman of color and the only one in the 1850 census noted as living at a professor’s residence.11 Dr. Davis owned two slaves at the time of the census.12 He was elected to the vestry of Christ Church in 1852.13

During the Civil War, Dr. Davis was one of three members of the University medical department who served the Confederate cause. He was commissioned a surgeon in the medical corps on July 3, 1861, and was described as being “worked half to death” along with Dr. Cabell.14 Davis evidently lodged wounded soldiers at his home. According to a journal kept by the Chairman of the Faculty at the University, at least two patients, one a lieutenant and one a general, died at Davis’s residence.15 Following the war Dr. Davis resumed his full-time professorship at the University and, Lucy having died in 1859, he married Caroline Hill with whom he had an additional three children.16